Yes, you heard it right. The exciting and dynamic game of Quidditch based on the fictional series – Harry Potter – is playing in reality. The game is designed to mirror the book version of the game which is played by two teams of seven players each. Each player is mounted on a broomstick and attempts to win more points than their opponents by the time the Golden Snitch is caught. The Golden Snitch is a tennis ball in a long yellow sock in this reality version of the game.

Quidditch is created in 2005 and become one of the world’s youngest games but growing in popularity in shortest of all the time with 300 teams in over 20 countries. It even has its own governing body, the International Quidditch Association (IQA), who are responsible for rules and regulations. 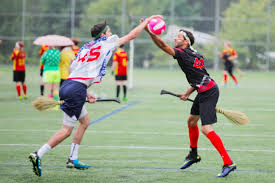 Object of the Game
The object of the Quidditch is to score more points than opponents by placing a slightly deflated volleyball called the Quaffle into the opposition’s baskets to gain 10 points, and by capturing the Golden Snitch to gain 30 points.

Players
Seven players in each Quidditch team are one Seeker, one Keeper, two Beaters and three Chasers – of which, each has a specific task.
* The Chasers are responsible for keeping possession of the Quaffle and throwing it through one of the opponent’s three hoops to score a goal. Chasers can pass the ball back and forth between each other but only one is allowed to enter into the scoring zone at one time.
* The two Beaters are responsible for throwing Bludgers at the opposition to disrupt them. Meanwhile, the opponent’s Beaters prevent the other team’s Bludgers and in turn, throw them back with the same intention. Beaters are usually the strongest and most physical within the team.
* The Keeper is a defensive player and is responsible for defending the team’s hoops.
* The Seeker is the team member who is responsible for capturing the all-important Golden Snitch