Despite the fact that practicing tennis solo against a brick wall can help you quickly master the game, practising with a friend for a singles or three for a doubles match on a proper tennis court would be much more fun and benefiting. But before you start, these are something you need to know:
1. The surface of the court 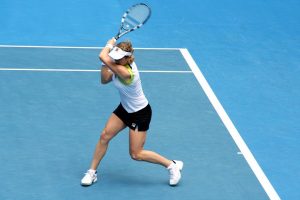 The lines form the court into a symmetrical rectangle with 2 baselines, two sidelines and four service courts which are the two spaces in front of each side of the net where a successful serve must land. In a singles match, players will use the inner sideline as a boundary line while in a doubles match, the boundary is the outer sideline. Basically, players must hit the ball so that it bounces inside the baselines, sidelines or service courts for points. If the ball bounces outside those lines during a serve, it is considered out of play.

The net is one of the most important elements in every court which has only one with 3.5 feet high at the posts and 3 feet high in the middle. Players must try not to touch it with racquet during the game and always remember to walk up to it when finished playing to shake opponents hand and say, “Good match!”. It’s an important courteous to do.

After practicing hitting the ball back and forth, you’ll be able to master the ability to place the ball. If the ball is hit diagonally from one corner to the other of the court, it’s a fine “crosscourt” shot. In the case, the ball goes down the sideline of the same side that player hit the ball from, it is a fine shot “down the line,” the harder of the two shots.

5. The court beside you

There might be case that there is a match playing on a court beside you, just remember to wait until they have completed playing their point to initiate contact.