Water basketball is a game which is a mixture of basketball and water polo played in a swimming pool. Each team of five or six players must attempt to shoot a ball at the goal within a certain time. The number of players per team varies depending on the rule of different countries.

The game first started in Niceville Florida although Netherlands have been played the game since 1970s then further developed by The Hobart Aquatic Centre to allow more recreational features to the game.  In 2005, the game was officially recognized as a form of basketball by the Italian Federation of Basketball. There are several variations of the sport depending on the country that the sport is played in.

In Netherlands, there are both regular tournaments and national championship are organized in which the best teams compete for the official Dutch Waterbasketbal championship title.

In Slovenia, water basketball was introduced in 1997 then two versions of water basketball were developed till that time. In first version, there was a classical basket fixed at the edge of the swimming pool which was inconvenient as players kept kicking on the wall of swimming pool and the basket was to high to reach. In the second version, a floating basket was used, making it even more difficult for players to throw the ball in the basket. 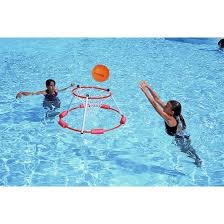 After that, a special basket with long pillar sunk in the water was invented and set up on the end at one meter over water level. A new playing rules is also created. The new creation help remove all disadvantages of the previously described version of water basketball with no wall and floating basket problem. Now, the game became very dynamic as it could be played behind the basket. This game is now played all over the world at both recreational and competitive level.