Equipment
The equipments required to play Quidditch includes:
* Broomstick: All players must stay mounted on a broomstick made of wood or PVC piping throughout the game. The broomstick must also be held between the legs of players while playing at all time which is resemble the version in the fictional series.
* Hoops: Three hoops of different heights (2m, 1.4m and 1m) are situated at each end of the pitch. Each is placed approximately two broomsticks apart with the tallest on the left.
* Quaffle: This is a volleyball that has been deflated and only Chasers and Keepers can utilise. Chasers must try to throw through it into the hoops in order to score points while Keepers must attempt to stop it.
* Bludgers: These are three deflated dodgeballs and can be used on the pitch by only Beaters to knock out the opponent as many times as possible. Meanwhile, opposition player has to stop, dismount, run back to their hoops and touch them before resuming their play.
* Golden Snitch: It is a tennis ball placed in a long yellow sock, attached to a ‘Snitch Runner’. A ‘Snitch Runner’ must run and try to avoid being catch by Seeker of both teams. As soon as the Golden Snitch is caught, the game ends immediately. 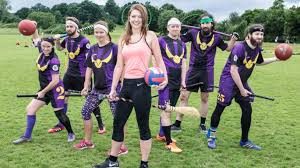 Regarding the rules of the game, there is a common misunderstanding in Quidditch that the winning team is the one that captures the Golden Snitch which is technically incorrect. The winner of the match is the team that win the most points although the team that catch the Snitch worth of 30-points is usually the winner. However, it is not always the case, a team can still win the game even if they haven’t captured the Golden Snitch just as long as they have more points than the opposing team.