In this article, we continue to refer about rules of water polo which is one of the most favorite water sports for team or group.

As shared from the former article, purpose of water polo is scoring goals than the opposing team to become winner. To start this game, you need to prepare two nets and a ball. its’ simple to start an interesting game.

Now, we continue to come other rules in water polo.

3, Players in one game

There are two teams in one game. Each team has seven members, including six outfield players and one goalkeeper.

Six outfield players consist of other roles, depending on other strategies of this team. They can play at the offensive, defensive or center forward. In general, water polo has also split specific positions for players like other team games such as football, hockey. However, positions in water polo can be adjusted and changed continuously in one turn. So, it’s more flexible than other games.

In water polo, it has a special position called utility players. They don’t have fixed position as a defensive or offensive player, they are flexible to help both offense and defense due to other cases.

Role of goalkeeper is like other team games. He will prevent ball to his net.

A goal will be made when ball passes the goal post and is below the crossbar. It’s legal.

Per player has maximum 30 second to possess ball without shooting any goal. After this time, he needs to transfer ball to others. Then the shot clock will reset. 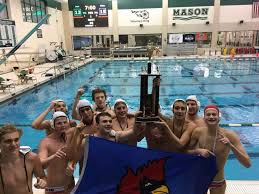 In the end of a match, which team has more goals, they are winner.

In case, a game finishes with a tied, they practice penalty shootout. There are 5 times for per team to shoot from the 5m line.

If finish 5 times, two teams continue to be tied, the penalty shootout will make until finding one missing team.

The fact, shootout is common in water polo.